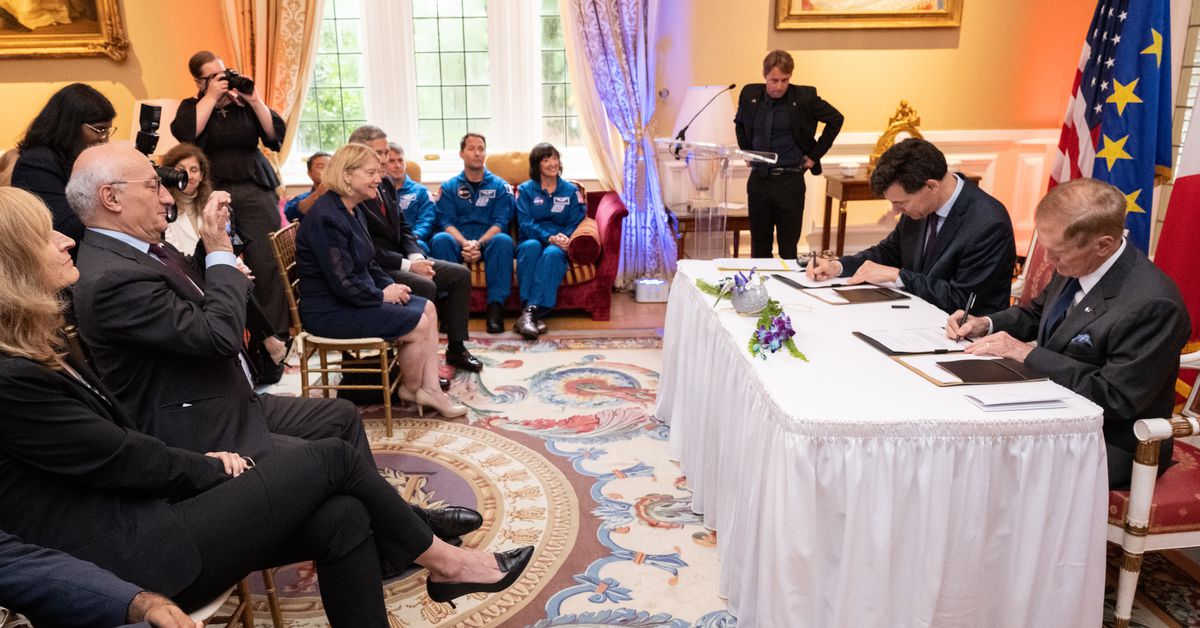 On Tuesday evening, France officially signed onto NASA’s Artemis Accords — the space agency’s set of guidelines and principles for how the US and other countries should explore the Moon in the future. France’s addition, long considered a big get for the Artemis Accords, brings the total number of signatory countries to 20, strengthening the international agreement ahead of NASA’s planned return to the lunar surface this decade.

When the finalized Artemis Accords were presented during the Trump administration in October 2020, NASA announced that eight countries had signed onto the document — including the United States. But there were some notable absences from that list. Two of the world’s largest space superpowers — China and Russia — have not signed, and Russia’s space chief has made it clear that the country is uninterested in partnering with NASA on its lunar exploration efforts. Two of Europe’s biggest space nations, France and Germany, weren’t on board either.

Now, after two years, France has finally come to the table, and the country is considered the most significant signatory yet for the Accords. “It was critical to get France on the same page as us for our lunar exploration and other plans, because they’re the dominant player in Europe along with Germany,” Gabriel Swiney, a senior policy advisor at NASA and one of the original authors of the Accords, tells The Verge. France is the largest contributor to the budget of the European Space Agency. The US also has a long-standing partnership with France’s space agency, CNES, and the country plays a pivotal role in operating the launch site and rockets for Europe’s primary launch provider, Arianespace.

France wasn’t completely sold on the Accords at first. “They have been open about the need for clarity on some of the issues with the Artemis Accords,” Swiney says. Now, it seems the country’s issues with the agreement have been resolved, giving the Accords a major stamp of approval from a once-skeptical nation.

Though the Artemis Accords are an international document, they’re intrinsically linked to NASA’s lunar ambitions. The name Artemis comes from NASA’s Artemis program, which aims to land the first woman and the first person of color on the lunar surface as early as 2025. While the timing of that landing is subject to change, NASA saw the need to have a preemptive international agreement with other nations before humans walked on the Moon again, detailing what rules and standards should be applied to lunar exploration. “What we’re trying to do is establish norms of behavior that every nation can agree to,” former NASA administrator Jim Bridenstine said in 2020. NASA collaborated with the US State Department to come up with the final rules.

The Artemis Accords build upon the backbone of international space law, known as the Outer Space Treaty. Entered into force in 1967, the treaty creates a loose framework for how nations should explore space. Signatories agree to explore space peacefully, not to claim sovereignty over celestial objects like the Moon and Mars, and not to put weapons of mass destruction in space. But the Outer Space Treaty is vague by design, which has left many of its tenets open to interpretation and debate over the last half-century.

The Artemis Accords take things further, focusing on slightly more rigid standards for exploring the Moon. For instance, the agreement establishes areas on the Moon called “safety zones.” If one nation is conducting work on a region of the lunar surface, it’ll let the other signatories know and other countries will not interfere in that area. The Accords also call for the preservation of heritage sights, such as the landing locations for the Apollo missions, and also protect the “extraction and utilization” of space resources. That way, countries can mine the Moon for materials and then use those materials in their lunar exploration efforts.

When the Artemis Accords were first presented, they had their fair share of criticism. One major critique revolved around the use of lunar resources, with some arguing the Accords were an American land grab in space. The concept of utilizing space resources is seen by some as conflicting with the Outer Space Treaty’s instruction not to claim sovereignty of a celestial object. In fact, this was partly one of France’s concerns at first, according to Swiney.

“France has been one of the countries making clear that they think that space resources is something that the international community needs to really spend some time and think about,” he says. “So that it doesn’t become either a Wild West gold rush situation, or that it doesn’t just replicate some of the same inequalities that we see on Earth.”

NASA and government officials worked with the French space agency, attempting to combat what they considered to be a misperception that space resources were prohibited by the Outer Space Treaty. Ultimately, France came around, with NASA presenting the Artemis Accords as simply a starting point — not an end to the space resources discussion. Under the Accords, nations can extract resources, but“you have to do it lawfully and you need to keep talking about it and resolve some of these bigger questions.” Swiney says. “So I think they realized that that was a good starting point, to then address the issues that they continue to feel very strongly about.”

The next big European get would be Germany, the second-largest contributor to ESA, and Swiney is optimistic about the prospect. “I think it’s just taking time for countries to gain familiarity with the Accords,” he says. “They hear not just one US administration, but two US administrations talk about them… And as we move forward with [Artemis] missions, which are really centered around science and exploration, I think people realize the Artemis Accords really are exactly what they claim to be, which is about trying to create rules for exploration and science.”

Another standingcriticism of the Accords revolved around the fact that NASA didn’t go through the traditional treaty-making process through the United Nations. “I think that concern has really been laid to rest just by the signatories we’ve gotten,” says Swiney. The Artemis Accords include a diverse group of some nontraditional spacefaring nations, like Columbia and Bahrain. As more countries sign on, it’s possible that the Artemis Accords may serve as a new framework for international space agreements in the future — one that might be slightly faster and more nimble than the often slow treaty route.

“It’s the idea that all these things are complementary, and that the Accords will then feed back into the United Nations’ process,” says Swiney. “But at the same time, we’re not going to sit and wait for the entire international community to provide guidance when we’re about to go back to the Moon and we need rules.

Swiney says to be on the lookout for even more signatories in the months ahead. Apart from Germany, he notes that India would be a particularly welcome signatory given the country’s robust space program. And soon, the Artemis Accords will transition from theoretical policy guidelines to implementation once flights to the Moon begin, which is ultimately going to be the more difficult part of the process. But the fact that the document has gained so many supporters so far has been a big win.

“We knew that these were topics that needed to be addressed before we started showing up to the Moon and going beyond, particularly in a persistent way,” Swiney says. “But we just weren’t sure whether it was something we could pull off. And I think since 2020, that narrative has really changed.”