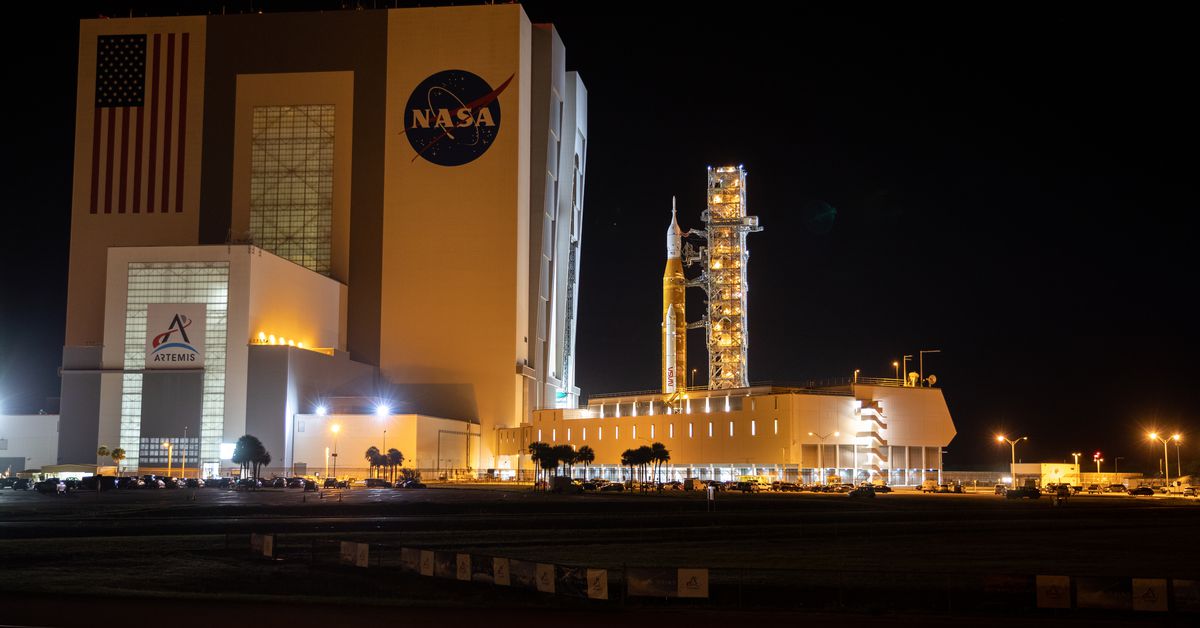 This morning, NASA’s new monster rocket, the Space Launch System, rolled out to its Florida launchpad for a second time, paving the way for the agency to perform a crucial dress rehearsal with the vehicle later this month. If that test goes well, then NASA may be poised to finally launch the rocket on its uncrewed debut flight sometime this year.

The Space Launch System, or SLS, is a key component of NASA’s Artemis program — the agency’s endeavor to send the first woman and the first person of color to the surface of the Moon, which NASA hopes to conduct by 2025.

The SLS’s history has been extremely bumpy. It has been in development for roughly a decade now, a period that’s been marked by cost overruns and delays. Back in March, NASA rolled out the SLS for the first time from within the agency’s massive Vehicle Assembly Building (VAB) at Kennedy Space Center, where the rocket had been fully pieced together. It made the 4-mile journey to its launchpad at LC-39B at KSC, where NASA attempted to conduct what is known as a “wet dress rehearsal” — an elaborate test that runs through all of the preparations for launch, including the loading of propellant, but without the actual launch.

That dress rehearsal, though, didn’t quite go to plan. NASA started and then stopped the days-long test three times. In the middle of the last test, NASA called things off early when engineers discovered a hydrogen leak near the base of the mobile launch platform — the massive structure that holds the rocket and provides support for SLS during launch. During another test, engineers identified a helium valve that wasn’t working properly, either.

After the three aborted attempts, NASA ultimately decided to roll back the SLS to the VAB to conduct repairs and updates to the rocket ahead of another wet dress rehearsal attempt. While back inside the massive building, the SLS team replaced the faulty helium valve, and tightened some loose bolts that may have caused the hydrogen leak. The detour also allowed the team to conduct other updates they’d planned to do after the dress rehearsal. Overall, the SLS team thinks they’ve fixed the leak issue, though they acknowledged they may find out more needs to be done during the dress rehearsal.

“I do have good confidence that we’ve got the right process,” John Blevins, chief engineer of SLS at NASA, said during a press conference. “Will it have to be tweaked? That’s a possibility, and we’ll find out pretty shortly.”

Starting at 12:10AM ET this morning, SLS on top of its mobile launcher rolled out to the pad at LC-39B, reaching the area at 8:20AM ET. NASA opted to do the rollout during the night, as storms are less likely to form at the time in June. Now, NASA is aiming to conduct its fourth attempt at a wet dress rehearsal no earlier than June 19th. That date could move slightly due to unforeseen weather, but NASA has prepared for that. “It is Florida in June, so thunderstorms are expected,” Cliff Lanham, NASA’s senior vehicle operations manager for Exploration Ground Systems, said during a press conference.

Hands-on with the Pixel 7 and 7 Pro: something familiar