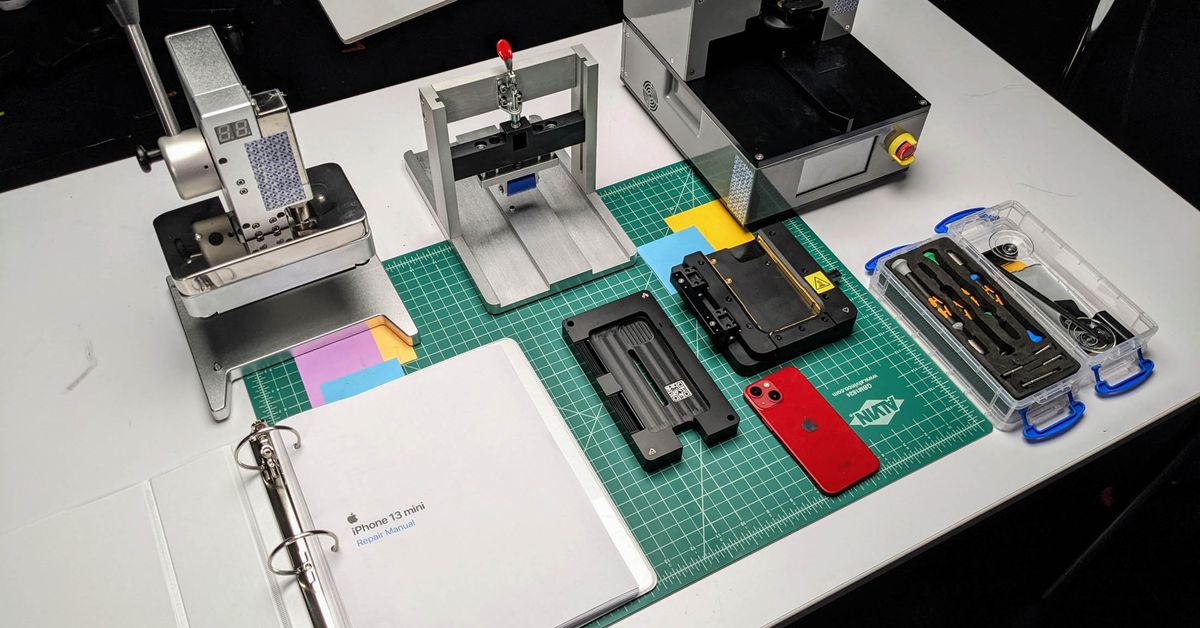 iFixit regularly performs dissections of the latest Apple gadgets, but this time, the repair resource site pitted its tools against other tools by taking apart Apple’s new iPhone self-service repair kit (via iMore). The take-apart process on Apple’s repair tools was documented and posted on iFixit’s YouTube channel, giving an inside look at the display press, battery press, and heated display removal contraptions.

The video starts off with a take-apart of the display press, which has a really smoothly operating handle that the iFixit host was most fond of, describing it as a “swan takes flight every time it glides up.” The handle is smooth because it uses ball bearings that move on a circulating track like a conveyor belt as the press moves up and down. It also houses an easily removable AA-sized Lithium battery that is held in a C-sized shell, powering a small control board that activates the countdown timer screen.

The display press has a tessellated rubber frame that presses down on the phone to seal a new waterproofing adhesive. Each section of the frame has varied spring force, but the strongest force is reserved for the corners.

The video teardown on the tools was conducted on ones that iFixit purchased, costing about $587.35 for the three tools based on the prices set on Apple’s Self Service site. You don’t have to purchase all of these tools since Apple will send them to you as a rental kit for $49, but there’s a catch.

The Verge’s Sean Hollister tested the kit himself and found out how difficult Apple is making it for people that want to conduct a simple repair on their own. Besides the $49 rental fee and $69 for the new battery (the same amount you’d pay at an Apple Store), Apple also required a $1,200 deposit to ensure the 79 pounds of repair tools in Pelican cases it sends out are returned to the company unharmed.

The setup seems amazingly overengineered but also very well designed — though the other press that’s for the battery was less impressive and “boring,” according to the iFixit host. They described the battery press as a “polished lawsuit prevention system,” alluding to its primary function as reducing the chance the user can puncture and cause a battery fire. But all it does is press a silicone roller onto the battery with a precise amount of force, which is just enough to adhere to the new battery.

The third tool is the Heated Display Removal Fixture, the most complex of the three tools in the video. The iFixit host describes it as “janky” based on its looks and since it comes with an unmatching white power cord — the same angled one that came with 2012 and newer Intel iMacs. This tool comes with a “hot pocket” that is basically a metal frame that is specially sized for the iPhone you’re about to open. If you press the hot pocket into the Heated Display Removal tool, it activates a switch that allows it to start heating, but only if it detects a phone is actually installed in it. The host also found that the LCD screen in the front is technically a touchscreen but is not used in that way at all.