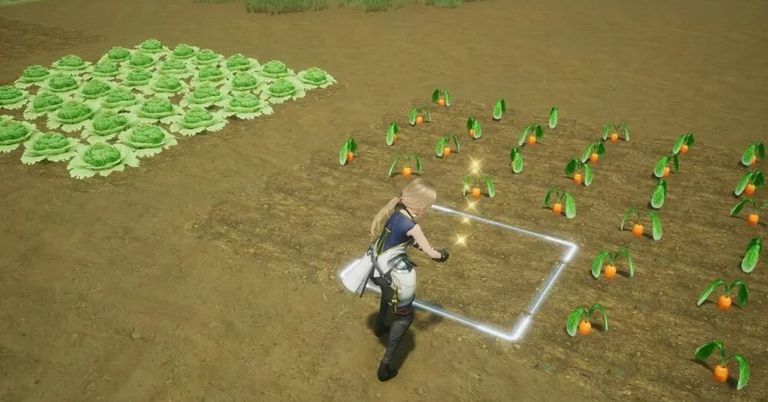 Nintendo just shared a detailed look at Harvestella, the upcoming farming sim / RPG from Square Enix, in its latest Treehouse Live presentation, and after watching the video, the game is now one of my most anticipated titles of the year.

The farming looks like many other farming sims you might have played — and I think that’s a good thing. You’ll have a plot of land where you’ll work with your crops, and you can plant and water things on a tile-based grid. The actual mechanics appear to be fairly streamlined, so hopefully they don’t get tedious; I was particularly happy to see that the “water wand” was generous with where it tossed water. Some crops have clever names, too, meaning you’ll be growing things like “carrops” and “cucumbles” (which look to be equivalent to carrots and cucumbers, respectively).

When you’re not farming, you can explore the world around you. You’ll be able to collect resources and take on enemies, and you’ll fight them using a battle system that looks to borrow a lot of aspects from MMOs. You can also visit the nearby village to stock up at a general store and visit a smithy to upgrade your weapons.

Like you’d expect from any farming sim game, yes, there are fishing spots. And while playing Harvestella, you’ll always be on the clock — there will only be so many in-game hours to take care of everything you might have to do in an in-game day.

I’ve poured hours and hours into Stardew Valley; the loop of farming, exploring, and talking with villagers kept me hooked. Harvestella looks to offer a lot of what I liked about Stardew while also layering on RPG-inspired mechanics, battles, and storytelling (Nintendo’s demo featured a talking unicorn that played a bigger role than I expected), and I think it could be something I play for a very long time.

Harvestella launches on Nintendo Switch and PC on November 4th. That’s already going to be a pretty busy time for games, but I’m pretty sure Harvestella is going to find its way onto my schedule.

During the Treehouse Live show, Nintendo also showed off some of what you can expect from Splatoon 3, including single-player levels and new weapons and abilities (like a grappling hook — it’s been a good week for those). The company is hosting a free Splatoon 3 “world premiere” on Saturday, where you can check out the multiplayer ahead of the game’s official release on September 9th.