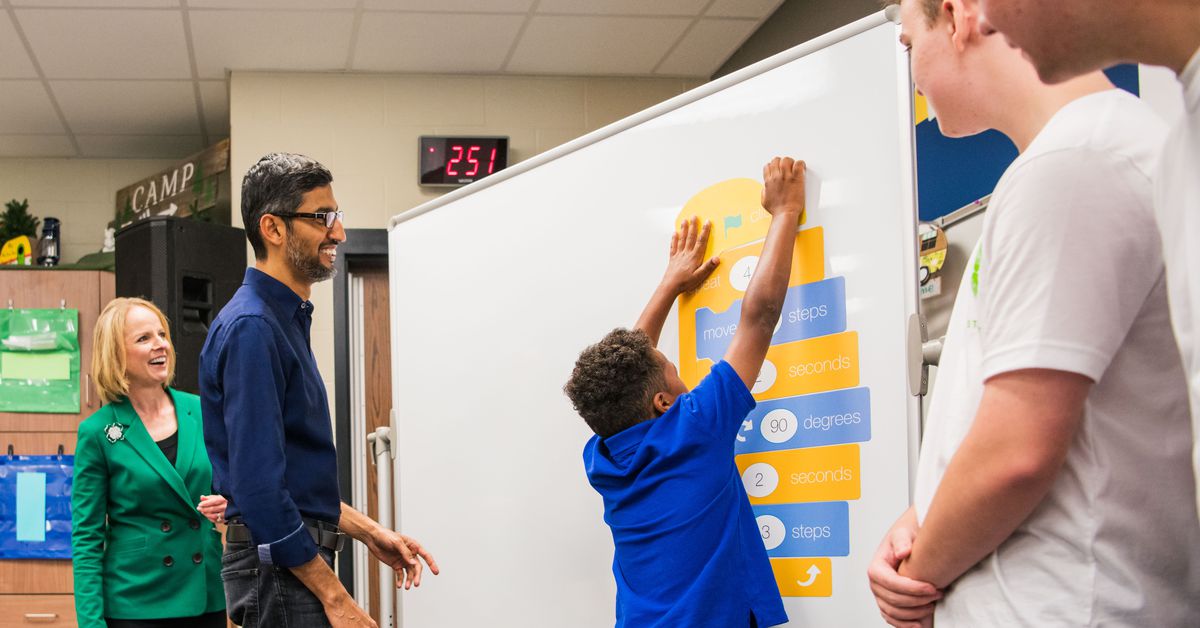 Google has announced $20 million in new commitments to expand computer science education among communities that are underrepresented in the field. The company expects its funds to improve educational access for more than 11 million American students.

“If we don’t get this right, the gaps that exist today will be exacerbated” said Google CEO Sundar Pichai on Wednesday. “Technology will end up playing such a big role in the future. That’s the fundamental reason we do it.”

Google’s goal in distributing funds, Pichai says, was to support groups with “deep expertise in education” who work with underrepresented communities — including students in rural areas, as well as racial and gender minorities.

“Living in the Bay Area… it’s clear to me how many schools here have already transitioned and incorporated exposure to CS education as part of their curriculum,” Pichai says. “It’s important that this happens across the country, to rural areas, to places that are historically underrepresented.”

Google will continue to be involved with the organizations receiving the funds, and will have some degree of input over how the money is used, though Pichai stressed that the approach will be collaborative. “We are looking to partner and support organizations at this scale — clearly having goals and working together,” Pichai said. “I wouldn’t call it oversight as much as it’s a partnership, and we are here to help these organizations succeed.”

“We’ll be helping every step of the way, but they’re in the driver’s seat,” said Google.org Americas Director Justin Steele.

The group has set a goal of “reaching” 200,000 kids, adults, volunteers, and educators through CS programs by the year 2024, and will update Google regularly on its progress.

“This $5 million grant from Google.org will have a major impact for the 4-H youth we serve,” Jennifer Sirangelo, President and CEO of National 4-H Council, told The Verge. “These resources will provide access to computer science education to youth nationwide, including six million 4-H’ers and more than 3,500 educators across the 4-H system.”

Computer science education has been a hot-button topic among big tech companies in recent months, and has been a particular pet issue of Google’s. Pichai, alongside hundreds of signatories including Apple CEO Tim Cook and Microsoft co-founder Bill Gates, signed an open letter in July that urged governors and educators to allow “every student in every school to have the opportunity to learn computer science.” Google also partnered with Figma earlier this summer to bring its design and prototyping platform to Chromebooks, with the stated goal of helping students try out software design.

Better access to computer science education is certainly a benefit for students around the US — studies have linked it with better problem-solving abilities, higher rates of college enrollment, and improved executive function. It’s also, surely, a benefit for Google and its competitors to have a larger, more skilled, and more diverse talent pool.