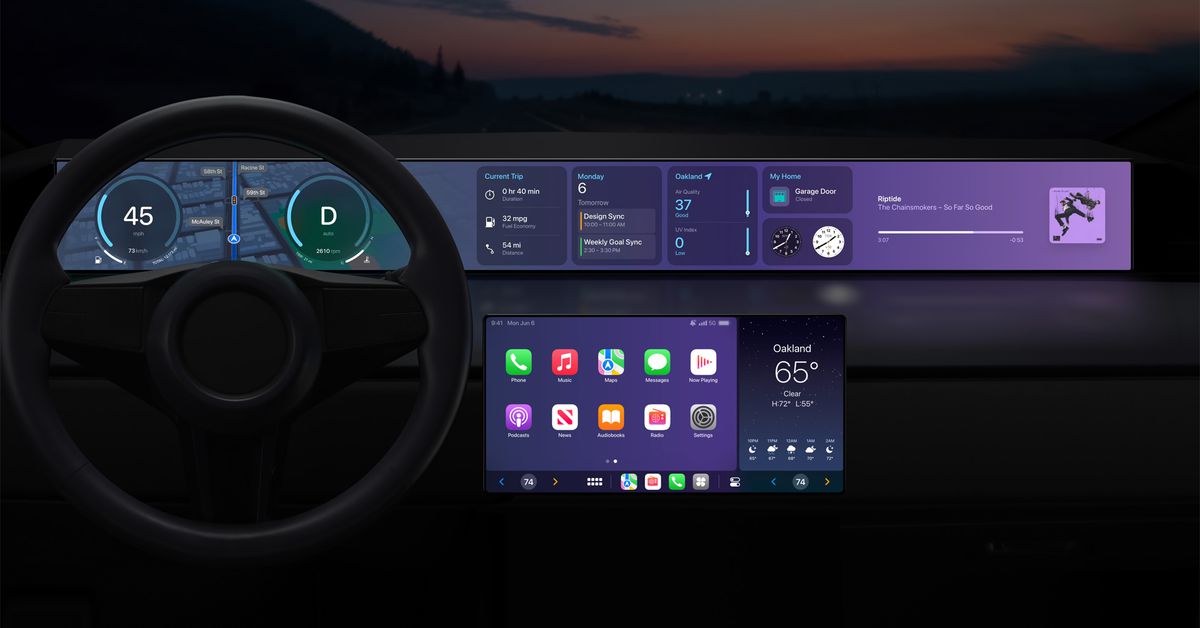 Apple can’t seem to build its own car, so it’ll just have to take over everyone else’s.

At its annual WWDC event on Monday, the tech giant announced that the next generation of CarPlay will soon break free from the bonds that confine it to the main infotainment screen and spread to additional screens within the vehicle. CarPlay will also, for the first time, use vehicle data to show crucial driving information like speed, fuel level, and engine temperature measurements as well as allow users to control settings including radio or climate.

Will your car be ready for this more expansive version of CarPlay? Because the car companies certainly aren’t.

The Verge reached out to 12 major automakers about the updated CarPlay, and most responded with some version of “sounds cool, we’re working on it.” To be sure, Apple itself wasn’t ready to reveal which car companies are on board, promising to announce later this year which vehicles would support this more maximalist version of CarPlay. And a spokesperson for the company didn’t respond to questions about which automakers Apple was targeting.

Was this another case of Apple sending automakers scrambling to develop systems that can accommodate its vision for in-car domination? Here’s what the automakers told us:

BMW: “Currently, we have placed a clear focus on further enhancing our iDrive user interface system and, as part of this development, will continue the seamless integration of Apple’s ecosystem. Integral to these efforts will be an evaluation of how the latest innovations announced at WWDC can be integrated into our solutions.”

Volvo: “At this time, we don’t have anything to share beyond that we plan to support this next generation of Apple CarPlay in future vehicles.”

Toyota: “We can’t comment or speculate on future product at this time.”

Ford: “Thanks for reaching out on the next-generation Apple CarPlay story. We do not have any additional information to share at this time.”

Polestar: “Apple CarPlay will come to Polestar 2 as part of an OTA update later this month. We’re also thrilled to announce that the next generation of CarPlay will be coming to Polestar cars in the future.”

Stellantis: “This is more of an Apple operating system for automotive applications rather than a CarPlay upgrade. We have not made any announcements regarding that system.”

Spokespersons for Mercedes-Benz, Volkswagen, General Motors, Hyundai, Nissan, and Honda did not immediately respond to requests for comment.

One possible wrench in this plan is that a number of automakers have already made software deals with other tech companies. Ford is working with Google to design UX software for “millions” of future vehicles, while Stellantis is doing the same with Amazon. Volvo and Polestar have simply turned over the UX to Google’s Android Automotive, which runs natively in certain cars. Apple has yet to make any similar deals with car manufacturers.

This isn’t the first time Apple has promised multiscreen CarPlay interoperability. When it unveiled iOS 13 in September 2019, the company promised a major overhaul of CarPlay to bring it more in line with Google’s Android Auto.

This included the ability to support various-sized screens and display information on two different screens in the vehicle at the same time. “Automakers can develop CarPlay systems that show information in a second screen, such as in a cluster or HUD [heads up display],” the company said at the time. (Although that sentence no longer appears on Apple’s iOS 13 support page.)

At the time, automakers said they were still figuring out how to allow Apple to overlay CarPlay’s display on these secondary screens. After this week’s announcements, it sounds like they’re still working on it.