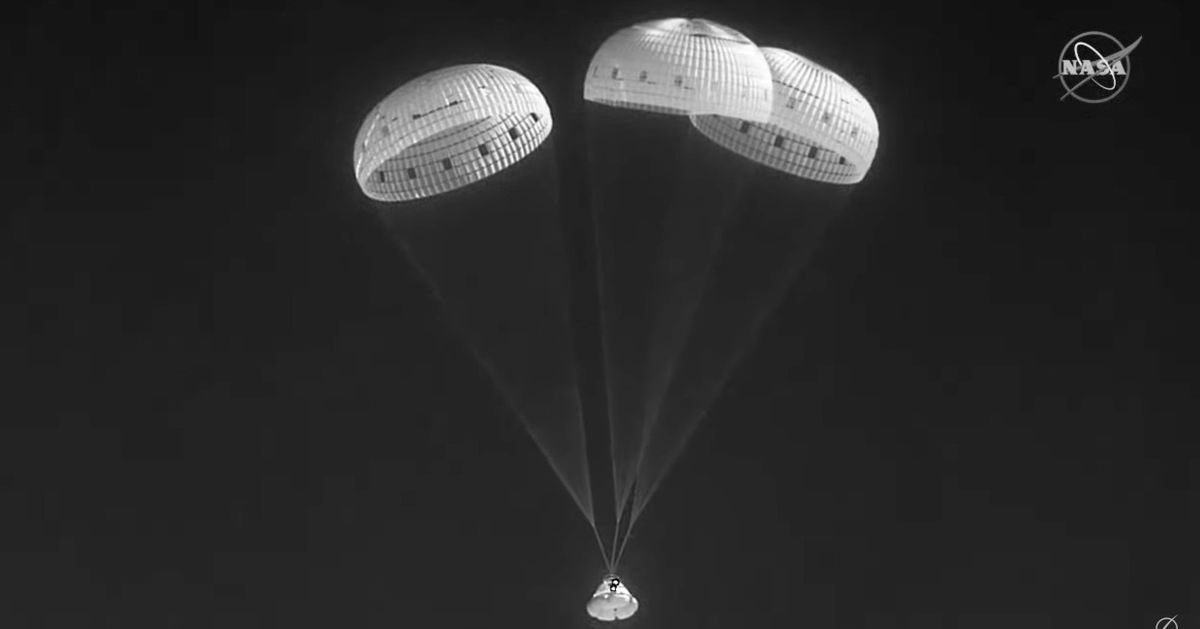 After spending a little less than a week at the space station, Boeing’s new passenger spacecraft, the CST-100 Starliner, returned to Earth this afternoon, landing intact with the help of parachutes and airbags in the New Mexico desert. The successful touchdown brings an end to a crucial test flight for Starliner, one that showcased the vehicle’s ability to launch to space, dock with the station, and then return home safely.

Shaped like a gumdrop, Boeing’s Starliner capsule was built in partnership with NASA in order to launch the agency’s astronauts to and from the International Space Station, or ISS. The mission is part of NASA’s Commercial Crew Program, which challenged private companies with creating space taxis to carry people to low Earth orbit. But before NASA will let its personnel ride on the vehicle, the space agency wanted Starliner to demonstrate that it could go through all the motions of a trip to the ISS — without people on board.

With today’s landing, that uncrewed test flight — called OFT-2 — has come to an end, with Starliner performing every major step it was meant to accomplish. The capsule successfully launched to orbit on May 19th, riding to space on top of an Atlas V rocket; it approached and docked with the ISS on May 20th; and it undocked with the space station this afternoon before heading home. It wasn’t a completely smooth flight, though. Throughout the mission, Starliner encountered a number of issues with its various thrusters, tiny engines used to maneuver and propel the vehicle through space. None of those problems proved to be fatal for the flight, though, and Starliner was able to complete OFT-2 as planned.

It’s also been a bumpy road getting to this launch. The name of this test flight, OFT-2, actually stands for Orbital Flight Test-2. That’s because it’s a do-over of the same test flight that Boeing tried to perform back in 2019. In December of that year, Boeing launched Starliner without a crew on board, sending it to space on another Atlas V rocket. But a software glitch on Starliner caused the capsule to fire its thrusters incorrectly after it separated from the rocket, and ultimately, the spacecraft got into the wrong orbit. The issue prevented Starliner from reaching the space station, and Boeing was not able to show the spacecraft’s ability to dock with the ISS. Boeing had to bring the spacecraft home early and was able to land the capsule in White Sands Missile Range in New Mexico — the same location Starliner landed today.

Boeing attempted to try again to launch Starliner last summer, but just hours before takeoff, the company halted the countdown after finding that more than a dozen propellant valves were sticking and not opening properly. It took Boeing up until now to fix the issues, and the company says it’s possible that a redesign of the valves may happen in the future. But now, two and a half years after the original botched flight, Starliner has finally shown that it can launch and autonomously dock with the ISS — a key feature it will have to perform over and over again when people are on board.

Landing is also a critical task for Starliner in order to bring passengers home safely. To demonstrate those capabilities for this flight, the capsule undocked with the ISS at 2:36PM ET this afternoon, slowly flying around the station and then distancing itself from the orbiting lab. At 6:49PM ET, Starliner used its onboard thrusters to slow itself down and take itself out of orbit, putting it on course with Earth’s surface. Shortly after, the vehicle plunged through the planet’s atmosphere, experiencing temperatures of up to 3,000 degrees Fahrenheit. Starliner then used a series of parachutes to slow its fall before landing in White Sands on top of airbags to help cushion the touchdown. It marked the second successful landing for Starliner, as Boeing already showcased the vehicle’s landing during its first botched test flight in 2019.

There was some slight concern about this landing, however, as Starliner experienced multiple problems with its thrusters throughout the flight. When the capsule launched to space last week, two of the 12 thrusters Starliner uses to insert itself into the right orbit failed. Boeing said drops in chamber pressure caused the thrusters to cut off early. Ultimately, Starliner’s flight control system was able to redirect to a backup thruster in time, and the capsule got into orbit as planned. However, those same thrusters were needed to take Starliner out of orbit, but they seemed to work as planned despite the two failed thrusters.

There were other bugs throughout the flight, too. A couple of different smaller thrusters, used to maneuver Starliner during docking, also failed due to low chamber pressure. However, it didn’t prevent the capsule from attaching to the ISS. “We have a lot of redundancy that really didn’t affect the rendezvous operations at all,” Steve Stich, NASA’s program manager for the Commercial Crew Program, said during a press conference after docking. And, on top of all of that, the Boeing team noticed that some of Starliner’s thermal systems used to cool the spacecraft showed extra cold temperatures, and the engineering team had to manage that during the docking.

Starliner still accomplished many of its goals while docked with the ISS. Astronauts on board the ISS opened Starliner’s hatch this weekend, entered the vehicle, and retrieved cargo brought to the station. The capsule has brought about 600 pounds of cargo back to Earth, as well as Rosie the Rocketeer, a mannequin that rode along inside Starliner to simulate what it’ll be like when humans ride on board.

Now, with Starliner back on Earth, there’s plenty of work left to do. Over the coming months, NASA and Boeing will study the failures that occurred on this flight and determine if Starliner is ready to carry people to space during a test flight called CFT, for Crewed Flight Test, which could occur by the end of the year. That will be a huge milestone for Boeing, which has fallen far behind NASA’s other Commercial Crew provider, SpaceX. SpaceX has already flown five crewed flights to the station for NASA on its Crew Dragon capsule, which carried its first passengers in 2020.

But if Starliner is cleared to fly people, NASA will finally have what it always wanted: two different American companies capable of taking agency astronauts to orbit.