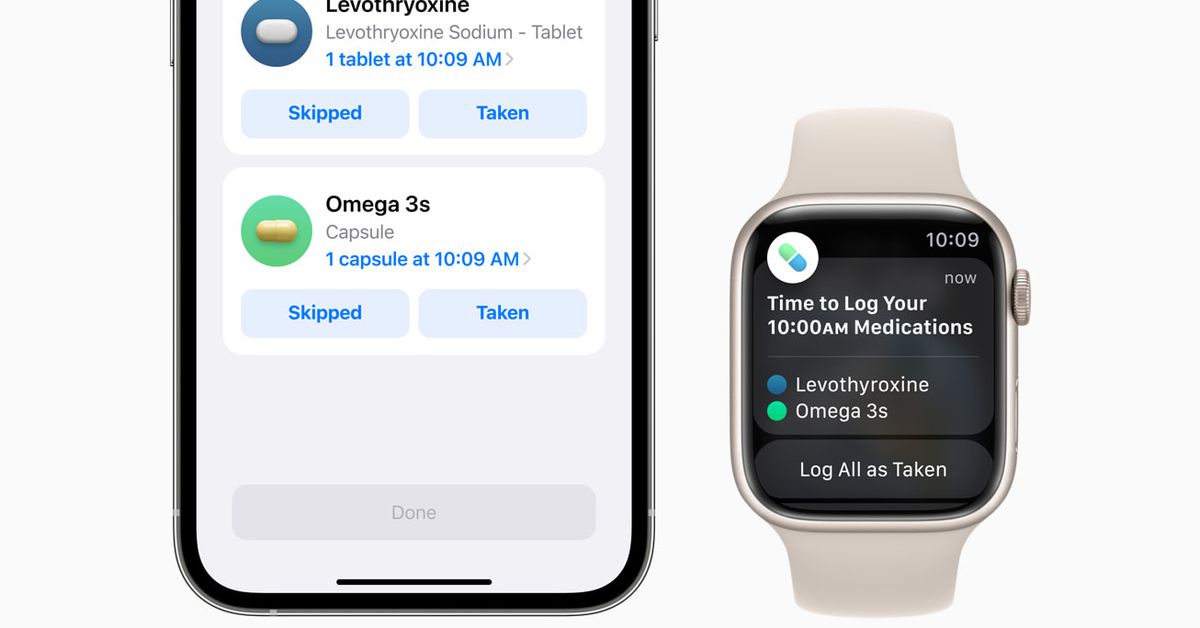 Apple isn’t inventing anything new with its medication tracking feature for iPhone and Apple Watch, which the company announced as part of watchOS 9 at WWDC 2022 this week. There are plenty of apps already on the market that give people alerts when they’re supposed to take their medications.

But trying to get people to take their drugs regularly is a major problem in healthcare, and around half of the people prescribed medications for chronic conditions don’t take them as instructed. That non-adherence costs the healthcare system hundreds of billions of dollars a year because people get sicker when they don’t take their meds properly. And even though the tool doesn’t have everything on experts’ wish lists for the ideal drug app, a tech company like Apple entering the ring could be a helpful development.

“I think it is a step in the right direction,” says Seth Heldenbrand, an associate professor of pharmacy practice at the University of Arkansas for Medical Sciences.

The tool lets users input a list of the medications they take and set a specific reminder schedule for each drug. When it’s time to take a med, people get an alert on their iPhone or Apple Watch. Then, they can hit “taken” or “skipped” to log the dose. The Health app will track how often a user takes their meds over time.

These types of nudges can help improve medication adherence, research shows. It’s helpful for the subset of patients where forgetting to take a drug is the main reason that they’re not adhering to a treatment plan, says Mary de Vera, an associate professor at the University of British Columbia who studies medication adherence. But it’s less helpful for other groups: if someone isn’t taking medication because they don’t understand why it’s necessary, a smartphone alert isn’t going to solve the problem.

People who use Apple’s medication app will be able to share their medication history with family members or others through the Health app’s sharing feature. That could give doctors insight into how their patients are taking medications, which Heldenbrand says is useful information. But it’d only be one-sided through the app — and one-sided communication around medication has historically been less successful than a system where doctors can write back, de Vera says. Nudges tend to work better if they’re part of a positive feedback loop with providers.

Just offering up a reminder feature might not drive major changes, particularly around something as challenging as medication adherence. “A patient might have a high internal motivation to start using something like this and interacting with it — but do they keep using it, and does it actually help them take their medications? That adherence needle is a hard needle,” Heldenbrand says.

For iPhone users, this feature would be more accessible than some standalone apps already on the market. Users wouldn’t have to figure out how to download and set up a separate program, especially if they’re already using the Health app. Because this is in the existing Apple ecosystem, it also means users aren’t sending their health data to another third party. “That provides a layer of protection for patients’ privacy,” Heldenbrand says.

Apps also come and go, and a tech giant like Apple offers more stability to someone’s routine — which experts say could be good for getting people to keep taking their medicine. “This is like long game, especially when we’re talking about medication adherence,” de Vera says. “For some patients, it’s lifelong. So you need a player that is going to play the long game.”

A medication feature means people and their doctors could see howmedication adherence is related to changes in things like sleep, exercise, and heart rhythm on the Health app. Those relationships could also be valuable to researchers looking at big-picture trends. Right now, even though there’s data to show that some people take medications more regularly when they’re using an app, it’s not clear if or how much that goes on to improve their health, Heldenbrand says. “That’s the million dollar question right now.”

Of course, that would require Apple to decide to either share information with researchers or launch their own studies to answer some of these questions. If they do, though, there could be a lot to learn. “It’d be very rich,” de Vera says. “And it would lead to a better understanding of how patients are taking their medications.”